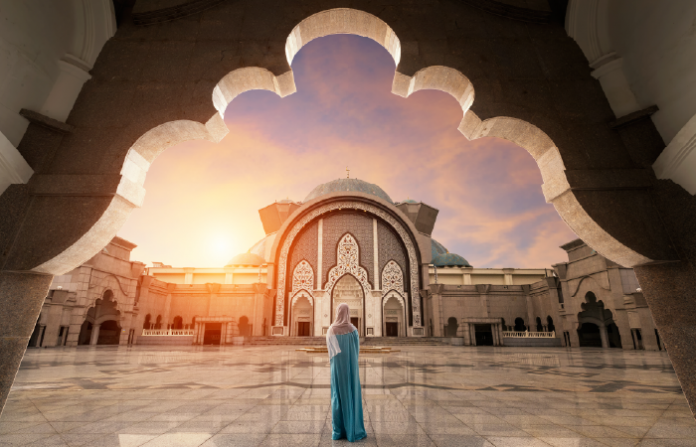 Malaysia, as everyone says, is the melting pot of Asia. It is home to beautiful beaches, rainforests, World Heritage sites, and much more. This is what makes the place even more attractive to tourists as they have a varied choice of places to see and things to do in Malaysia. While the primary languages spoken here are English, Malay, and Tamil, the religions followed are Islam, Hinduism, Christianity, and Buddhism. Malaysia is also known for the rich cultural and religious heritage that it nestles within.

The temples, mosques, churches, etc. are a few of the main tourist attractions in the country. If you are interested in learning about Islamic culture and architecture, Malaysia has some jaw-dropping and state-of-the-art mosques that you could explore. A few of the famous ones are Masjid Shah Alam, Putrajaya Mosque, National Mosque of Malaysia, and Melaka Straits Mosque. Let us talk more in detail about these!

The Sultan Salahuddin Abdul Aziz Mosque or the Masjid Shah Alam is famous as the Blue Mosque of Malaysia. It is called so because of its striking blue and silver dome. The Masjid Shah Alam is also renowned for being the biggest mosque in Malaysia, with a capacity of 24,000. This mosque is also reputed to have the tallest minarets in the world, going up to 142.3 meters.

What’s special: The mosque faces the Garden of Islamic Arts, and it is worth a visit.

How to reach: You can reach Masjid Shah Alam by train or even take a bus there!

Known as the principal mosque of Malaysia, the Putrajaya Mosque is located at a walking distance from the Prime Minister’s office. It was built around twenty years back and named after the first prime minister of Malaysia, Tunku Abdul Rahman Putra Al-Haj. This mosque of Kuala Lumpur is one of the most-visited ones and is also known for its incredibly beautiful architecture.

What’s special: The Putrajaya Mosque is known as the Pink Mosque because of the beautiful rosy hue it has.

How to reach: To reach the Putrajaya Mosque, you can take the KLIA Transit train from KL Sentral to Putrajaya. You can then take a taxi or a bus to the mosque.

What’s special: The umbrella roof of the mosque is iconic and has a deeper meaning of independence attached to it.

How to reach: The easiest way to get to the National Mosque of Malaysia is by the Rapid KL bus.

What’s special: Be it sunrise or sunset, the view is breathtaking as the Melaka Straits Mosque looks like it is floating on water.

How to reach: If you are in Kuala Lumpur, this mosque is a two-hour drive from there. You can also take a bus.

What’s special: The seven-story tower of the mosque is decorated with calligraphy from Indonesia and intricate teakwood carvings.

How to reach: The mosque is just a half-hour drive from Georgetown.

Masjid Negara is the most famous mosque Kuala Lumpur has to offer. It has an extremely modern architecture mixed with the perfect amount of traditional designs added to it. If you are thinking about which mosque Kuala Lumpur boasts of, this is undoubtedly the one. It is also called the National Museum of Malaysia and is an excellent place for some inner reflection.

What’s special: The geometric and abstract shapes added to the design make it more of an instrument for the tourists.

How to reach: The cheapest way to get from KL Sentral Station to Masjid Negara (Station) is by bus.

These are just some of the incredible mosques in Malaysia. The best way to travel to these gorgeous mosques is by bus. You can go to the redBus website and book your bus online tickets to visit these mosques. You will surely get great deals and discounts on the redBus. So, what are you waiting for? Start packing, folks!

Kapas Island – All You Need To Know

Take a Ferry to Bintan Island With Family

A New Heritage Trail Coming Up in Kelantan