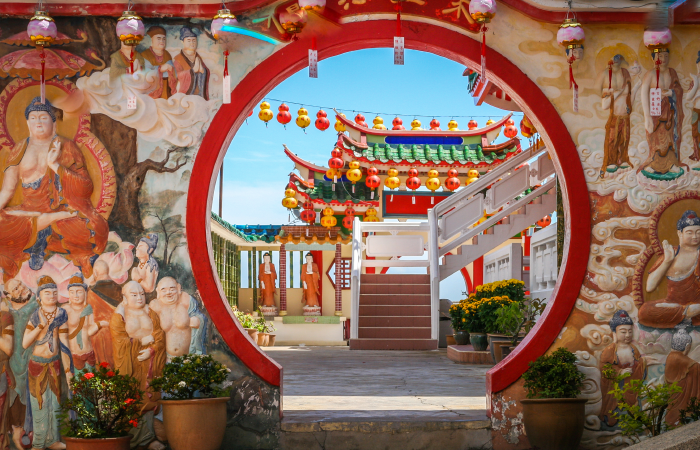 Whenever we plan a holiday, there are always some specific reasons as to why we pick out those exact locations. Some are interested in the mountains, beaches, while some choose historical places which have a rich cultural past. Penang, Malaysia’s most tourist-frequented place, also features a number of heritage sites there that make it an exciting spot. The extremely well-preserved heritage buildings in Penang’s capital, Georgetown, are one of the biggest tourist attractions. These are also given a place in the list of UNESCO’S World Heritage Cultural Sites. Read on to know more about these heritage sites in Georgetown Penang.

You may like to read: Penang and its different shades of blue

Before planning your trip to Georgetown Penang, you need to know about all the places you should visit and what are the significance attached to it. Listed below are a few must-visit heritage sites that you absolutely cannot miss!

Listed as one of the heritage sites, this building was established in 1965 by Raja Tun Uda Al-Haj Bin Raja Muhammad. It showcases the journey of Georgetown, Penang, and how it has developed over the years. From political history to art history, this museum will help you understand the history of this place correctly. The museum has photographs, documents, costumes, and everything else that your nerdy mind can crave for!

Fort Cornwallis is known as the largest standing fort in Malaysia. It was built in 1786 to defend people from enemies. The fort is also home to one of the oldest lighthouses, the oldest chapel, and the largest canon in Malaysia. Some prison cells are also there inside the fort, and it sure does make for an interesting visit for any history buff!

This one is a must-visit for all architecture fans who visit Georgetown Penang. Built by the British in 1903, this building is undoubtedly a marvel and often studied by several architecture students. It is a Victorian-style building and houses the head office of Penang Island City Council. Although it went by another name when Georgetown stained city status, City Hall is the commonly referred name for this marvelous heritage site.

Not many know that this temple was built in 1728, which is why it is considered Penang’s oldest Taoist Temple. The architecture of this Penang Temple has a Chinese influence with dragon figurines in abundance. This is a must-visit for all the Chinese culture enthusiasts who would love to explore the Taoist worshipping places.

Indian Muslim traders built this mosque in the 19th century, and it serves as a prominent feature of Georgetown’s Islamic history. It is also a significant part of the Muslim history of Penang as it was the first permanent Muslim institution in the area during that century. This, too, is considered as one of the architectural masterpieces in Penang.

St George’s Church is a 19th century Anglican Church in Georgetown and also falls under the UNESCO World Heritage Sites list. It is a beauty to look at, and many memorable weddings and functions have been held in this church. It’s also a must-visit as it holds stories from the colonized times and the Christian heritage of the place.

Cheong Fatt Tze Mansion is a very distinctive building due to its indigo colored exterior walls. Often referred to as the Blue Mansion, this is a Government heritage building, and it has, in several TV programs as well as films! So, for all you social media lovers, this site is Instagram-worthy! What do you think?

Apart from being home to various Heritage Sites, Penang, especially its Georgetown, is known for the several old buildings, crazy street art, and of course, for being a melting pot of several cultures! When in Georgetown, make sure to do these few things:

By now, we are sure you’re pondering over the idea of making Penang your next holiday vacation! Whether you are going for the beaches or the food or the heritage sites, Penang is a must-visit holiday spot. So, without wasting any more time, go to the redBus website and get your online bus tickets without any hassle. redBus is convenient not just for traveling to Penang but also for traveling in and around the place. You will also get several discounts and deals for booking your international and local travel only on redBus!

Want to See the Blue Tears in Malaysia? Visit These Places

Top Spots for Diving in Malaysia