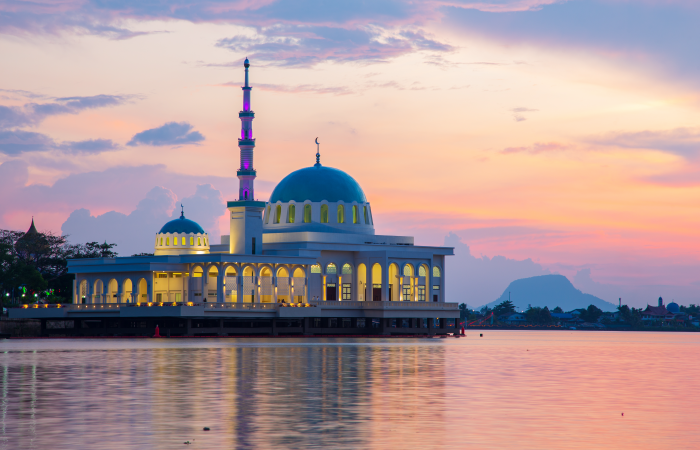 Pristine beaches, tropical forests, mesmerizing aquatic life, lush mountains, and amazing landscapes are not the only center of attraction of Malaysia. The country is known for its multi-ethnic population. With over 60% of the people following Islam, Malaysia has some of the most iconic mosques in the world. One such example of the long Islamic culture and architecture in Malaysia is its floating mosques. The mosques that are built at the waterfront stiles are worth-seeing for their picturesque views. Let’s take a look at this list of floating mosques in Malaysia:

The iconic Putra Mosque, located in Putrajaya, is world-recognized, and its beauty can be compared to some of the best mosques in the world. The mosque is located on the banks of Putrajaya Lake. It can be identified with its distinct rose-tinted pink granite dome. The construction of the mosque started in the year 1997, and the doors were open for prayers in 1999. This mosque can comfortably accommodate 15,000 people for worship at any time. Located next to the Prime Minister’s office, the mosque looks heavenly during sunset with the orange sky and the pink dome coming together.

Started in the year 2007, Tanjung Bungah is said to be the first sea floating mosque in Malaysia. Located at the waterfront of Tanjung Bungah of the Penang Islands, this mosque can accommodate 1500 people for worship. This Tanjung Bungah bay mosque was built to replace the old Tanjung Bungah Mosque with a built cost of 15 million. The new Tanjung Bungah has the height of a seven-story building with three domes, the main compound, and a towering minaret. Since the opening of the Tanjung Mosque, it has become one of the landmark locations of Penang Island.

Kota Kinabalu City Mosque is among the most famous religious sites in the entire Malaysia. Located in Sabah Borneo, the Kota Kinabalu City Mosque is famously known as the floating mosque. The mosque is based on the second most religious site in Islam, the Nawabi Mosque of Madina. Started in the year 1992, the construction of this sacred site completed after eight years in 2000. Surrounded by the man made lagoon, the holy mosque can accompany 12,000 people for worship at any given time. The Kota Kinabalu City floating mosque can be recognized by the blue and silver dome, which is also inspired by the Arabic architecture.

Located at the waterfront of a human-made Island near the city of Melaka, this famous mosque was open for worship in 2006. The main attraction of this mosque is the architecture of the site, inspired by the Arabic-Malay architecture; this mosque is built with rather a modern approach to the said inspiration. The view of the mosque is simply breathtaking during the sunset or the sunrise when the golden dome of the mosque resonates with sunlight, and the entire mosque becomes one with the lake as if it is floating.

The Crystal Mosque of Terengganu is easily the most spectacular in this list. Situated at the Islamic Heritage Park in the human-made Island of Wan Man, this mosque is sitting at the human-made waterfront fused with the Moorish and Gothic architectural style. The exterior of this glamorous mosque is made with steel, glass, and crystals that give this mosque its dazzling look. Opened in the year 2008, the mosque has a capacity of 1500 people for prayer at once.

Tengku Tengah Zahrah Mosque opened in the year 1995 as the first floating mosque of Malaysia. Colored in all white, the Tengku Tengah Zaharah Mosque is inspired by Moorish architecture. It uses marble, ceramics, bomanite, and mosaics as components. On days when there is a clear sky, the mirror image of the mosque in the river waterfront looks riveting. Still, wait for either sunset or the sunrise to enjoy the magnificence of this stunning white architectural wonder.

Situated only 30km from Kuala Lumpur and 36 km from Kuala Lumpur airport is another floating mosque of Malaysia, the AL- Salam Puchong Perdana Mosque of Selangor. Built between 2004 and 2006, this mosque sits on the banks of Puchong Perdana Lake. The lakeside location of the mosque makes it appear like it’s gliding on the lake water; the major attraction of this mosque is the magnificent golden dome.