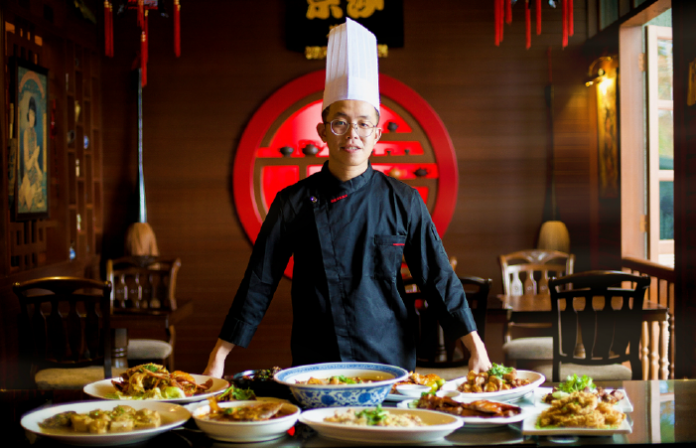 While Malaysian restaurants await their chance to earn their place in the prized red book- the Michelin global guide, their link to noteworthy Michelin star restaurants and chefs across the world have been earning them a recognition of sorts and brownie points from foodies! Soak in the ambiance, celebrate special occasions, or simply savor signature dishes of world-renowned chefs at the best restaurants – if a visit to Kuala Lumpur is in the offing, why not include these gourmet destinations to create lasting memories?

Having carved a niche as one of the Michelin-star restaurants in Singapore, Chef Emmanuel Stroobant and Edina Hong setup Saint Pierre KL on Jalan Ampang as their first outpost serving French and European cuisine. With over half of the team from Singapore here, they work to dish out a consistent experience for every diner amidst luxurious hospitality, making it one of the best places to eat and worthy of Michelin stars.

Located in Taman Desa, the Malaysian born chef Heng runs this ground floor Michelin star franchise of 1 Michelin star restaurant Pang’s kitchen, Hong Kong- not once but four years in a row. Having trained under founding master chef Pang Pak-Sheung, this is one of the best restaurants known for ‘serving up a lip-smacking array of Cantonese dishes.’ A must visit if you want a taste of home-cooked Chinese cuisine perfected over 15 years!

Set in the iconic 58-storeyed Menara 3 Petronas near the Suria KLCC mall, Nobu KL is linked to Michelin star chef Nobuyuki Matsuhisa. It is the first South-East Asian Nobu franchise to serve ‘Japanese cuisine with a Peruvian influence menu.’ Trained at Nobu’s, Berkeley Street in London, Chef Philip Leong heads operations at this KL franchise, which is one of the best places to eat world-class sushi with incomparable flavor. Their Japanese and Japanese fusion cuisine comes with vegan and vegetarian-friendly options. For an upscale fine dining experience, head here. Do adhere to their strict dress code and children’s policy!

Located in the Pavillion mall at KL, the 6th-floor restaurant DIN is linked to Din Tai Fung, Hong Kong, which earned 1 Michelin star. A non-pork restaurant, they serve Taiwanese cuisine with a ‘variety of noodle and fried rice dishes cooked to order’. Famous for its Michelin star soup dumpling, its minimalistic interiors make it one of the best places to eat and relish food. Their a-la-carte menu is paired with fast service and friendly staff. DIN by Din Tai Fung is located at the KL International Airport too!

Located in KL Sentral, TAKA is linked to Sushi Saito, which earned 3 Michelin stars making it one of the best places to eat. With Hinoki wood counters and interiors that replicate the original restaurant in Tokyo, One of the best restaurants for Cantonese boasts of chefs hand-picked and personally trained by Chef Takashi Saito, ensuring you ‘Sushi using the finest and freshest seasonal ingredients flown in from Japan in traditional edomae style.’

Set up by Jeff Ramsey and the ‘be’ group, this 11th-floor restaurant in Damansara Heights is known as much for its picture-postcard views of Kuala Lumpur as much as the dining experience either off the set seasonal menu or a-la-carte menu. One of the best restaurants for fine dining, their flavorful food, has been tagged as being ‘refreshingly inventive.’ What’s more? You can savor their Michelin star creative culinary delights accompanied by the perfect setting making it one of the best places to eat.

Also worthy of mention is one of the best restaurants by Chef Chan. Located both in city center KL as well as in Ipoh, Liao Fan Hawker Chan is known to serve one of the ‘world’s cheapest Michelin starred meals’ at around RM40.

Amidst this vibrant country that celebrates everything Asian replete with street food alongside such upscale restaurants, isn’t a share of food fun almost a given? Come up with your own list of the best places to eat – With its remarkable road network, convenient boarding, and drop off locations at Kuala Lumpur, Ipoh, and many more locations – hop on a redBus and head to your choice of a Malaysian food experience.

Durian – The King of Malaysian Fruits

5 Penang Food You Must Try

A Culinary Tour of Malaysian Cities